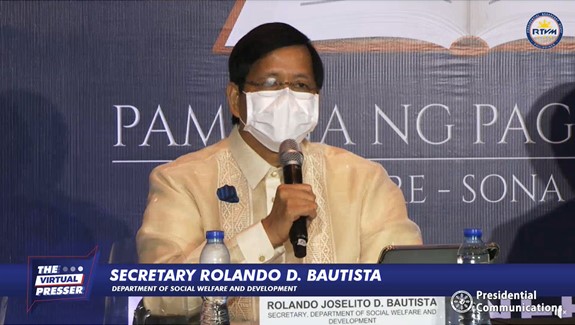 DSWD Secretary Rolando Joselito Bautista reports to the people the accomplishments of the Human Development and Poverty Reduction Cluster under the Duterte Administration during the  Pamana ng Pagbabago: The 2021 Pre-SONA Forum on July 14 at the PICC.

As the Chair of the Human Development and Poverty Reduction Cluster (HDPRC), Department of Social Welfare and Development (DSWD) Secretary Rolando Joselito Bautista reported the gains of the cluster in improving the lives of Filipinos during the Pamana ng Pagbabago: The 2021 Pre-SONA Forum, held at the Philippine International Convention Center in Pasay City, on July 14.

In his speech, Secretary Bautista highlighted the major accomplishments of the Cluster along social protection, health, education, agriculture, and employment, among others, that helped address poverty problems in the country.

Poverty incidence down to 16 percent

The enactment of the 4Ps law in 2019 has further strengthened the provision of services to the 4.3 million program beneficiaries.

As pointed out by Secretary Bautista during his speech, the fight against hunger and malnutrition was prioritized by the Cluster through the Inter-Agency Task Force on Zero Hunger, which is composed of 15 agencies and chaired by the Office of Cabinet Secretary Karlo Nograles.

These agencies responded to and implemented the National Food Policy through different programs including the Enhanced Partnership Against Hunger and Poverty Program; Plant, Plant, Plant project of the Department of Agriculture; Mandatory Food Fortification Program and Feeding Programs of the National Nutrition Council, Department of Education (DepEd), and DSWD.

He also mentioned that the current administration ensures, in spite of the global crisis, that there are program plans intended to end hunger before 2030, pursuant to the Sustainable Development Goals.

Secretary Bautista assured the public that the HDRPC continues to ensure the provision of quality education despite the challenges that the country faces with its learning system due to the pandemic.

Through the implementation of various distance learning modalities, spearheaded by the DepEd, 26.7 million students were able to pursue their studies, which is equivalent to 97% of the total number of enrollees last school year.

He further mentioned that through the Tuition-Free Program and other Tertiary Education Subsidy Programs, more than 1.6 million students were enrolled in 219 state and local universities and colleges in the country. Likewise, over 1.3 million students have benefited from the Commission on Higher Education’s Student Financial Assistance Program since 2016.

Through the collaborative efforts of the HDRPC in promoting public health, various programs were implemented to provide quality health care services.

Secretary Bautista reported that more than 110 million Filipinos have benefited from the National Health Insurance Program since the Universal Health Care Act was signed into law two years ago.

Furthermore, 127 Malasakit Centers were established across the country, with over 2 million beneficiaries who were provided with medical assistance.

Likewise, he stated that through the collaborative efforts of the agencies, and the enactment of various laws under the Duterte Administration, the government was able to achieve its goal of uplifting the lives of Filipino communities .

The HDRPC Chair vowed that the 37 member-agencies of the Cluster will continue to commit their respective policies, programs, and projects in providing every Filipino broader access to education, employment, healthcare, and government services in the last year of President Duterte.

Lastly, Secretary Bautista called on national agencies, civic society groups, local government units, and even every community and individual to support and contribute in sustaining, flourishing, and improving these ‘Pamana ng Pagbabago’ so the next generation will experience and enjoy a better life. ###