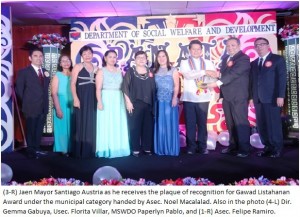 City of San Fernanado, Pampanga – The Department of Social Welfare and Development (DSWD) awarded Jaen Nueva Ecija in the recent Gawad Listahanan under the municipal government category during the 65th DSWD anniversary.
Gawad Listahanan is an award that aims to recognize LGUs as the Department’s data sharing partners and advocates of objective targeting of social protection beneficiaries. It confers award to LGUs for providing services and assistance to the Listahanan identified poor families and promotes the complementation and convergence of all social protection stakeholders on the identified poor to effectively address the different aspects of poverty.

According to Paperlyn U. Pablo, MSWDO, the municipality appreciated the Listahanan Database shared by the DSWD on the List of Poor Households in the community. On 2014, the database for the list of poor households was received. Based on Listahanan database, a total of 10,289 poor women in Municipality of Jaen were registered. Maybe not all poor women needs to be empowered, not all of them needs assistance, not all of them are willing to change their lifestyles but the Local Government Unit (LGU) of Jaen believes that we have to do our parts to locate those identified poor women, determine their current situations, create program and services that will benefit those in vulnerable conditions to uplift their way of living.

The Listahanan served as main source of the MSWD Office in the provision of basic social services since 2013. The validation of identified 10,289 poor women as part of sectoral group was facilitated by the Listahanan volunteers, KALIPI officers and MSWDO staff. It was found out that more than 35% of names listed are children/girls but majority belongs to poor households.

Formulation of advocacy campaign was facilitated which then was called “Listahanan Habit”. All Barangay Councils of LGU Jaen were encouraged to use the Listahanan database as their reference in strategic planning and providing services to their poor constituents. In order to understand and realize the importance of Listahanan database, the MSWDO conducted orientation to all Barangay Captains of Jaen together with the Local Chief Executive. The printed copy of Listahanan database was awarded and shared to them after the orientation. In order for the people be familiarized with the project, tarpaulins on “Listahanan Habit” were hanged in MSWD office and barangay halls as part of the advocacy.

The municipality of Jaen received cash prize and a plaque. ### (F.T. Sanga, Jr.)